A senior Iranian cleric has died from coronavirus as the country continues to battle the pandemic, which has killed more people in Iran to date than any other country outside of China and Italy.

Ayatollah Hashem Bathaei-Golpaygani died Monday, according to multiple Iranian news outlets. The 79-year-old cleric was a member of Iran’s Assembly of Experts, the body that chooses the country’s supreme leader—currently Ayatollah Ali Khamenei.

Bathaei-Golpaygani was taken to the Shahid Beheshti Hospital in the city of Qom to the south of Tehran on Saturday. Despite treatment, he passed away on Monday morning, Mehr News Agency reported.

The chairman of the Assembly of Experts, Ayatollah Ahmad Jannati, said his late colleague had “devoted his life to serving the Islamic establishment, promoting the teachings of the Prophet and lecturing in seminary and university.”

The speaker of the Iranian parliament, Ali Larijani, also expressed his sadness at the news. He said Bathaei-Golpaygani had been devoted to “compiling valuable intellectual and religious works, and educating students” in his role.

Iran has been one of the nations worst affected by coronavirus. The Iranian health ministry said Monday the number of confirmed cases had risen to 14,991 with 853 deaths.

The pandemic has taken hold at every level of Iranian society, infecting and killing normal citizens as well as senior regime officials.

Bathaei-Golpaygani is the latest example, but earlier this month 71-year-old Mohammad Mirmohammadi—a member of the Expediency Discernment Council that advises the supreme leader—also died.

Others infected include multiple members of parliament, Vice President Masoumeh Ebtekar who serves as President Hassan Rouhani’s deputy for women’s affairs and the highest-ranking woman in the government, and Iraj Harirchi—the deputy health minister who had been leading the fight against the spread of the virus.

President Hassan Rouhani said Monday the peak of new infections in Iran has passed. “Based on the figures, we are past the peak of the virus, but I still suggest people stay at home, and in case of urgency, observe all health protocols,” Rouhani said, according to Mehr.

Iran was one of the first nations outside of China to record an explosion in coronavirus cases. Worldwide, almost 170,000 infections have been confirmed with more than 6,500 deaths. Some 77,000 people have recovered. 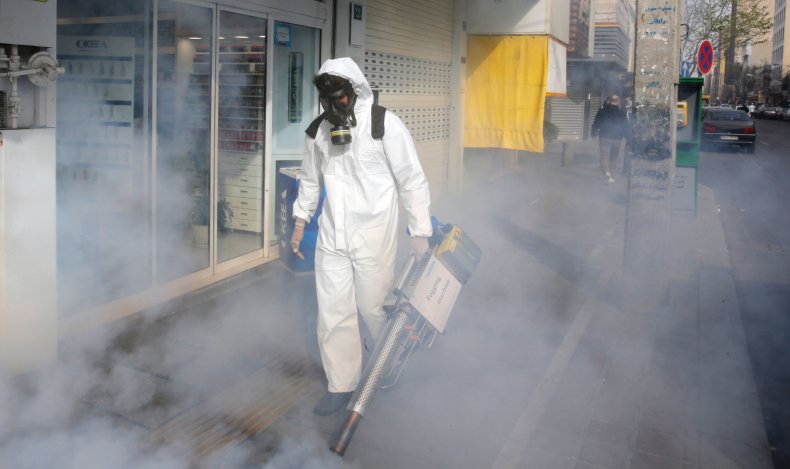 An Iranian firefighter disinfects a street in the capital Tehran in a bid to halt the wild spread of coronavirus on March 13 2020. STR/AFP via Getty Images/Getty