A new poll of Florida voters shows that Democratic presidential candidate Joe Biden would beat President Donald Trump in the key swing state of Florida if the election were held today.

The University of North Florida released the polling data on Monday morning. The survey showed that a majority of voters in the Southern state disapprove of Trump’s handling of the coronavirus pandemic, and that a plurality of voters would pick Biden over the incumbent president in a hypothetical general election matchup. 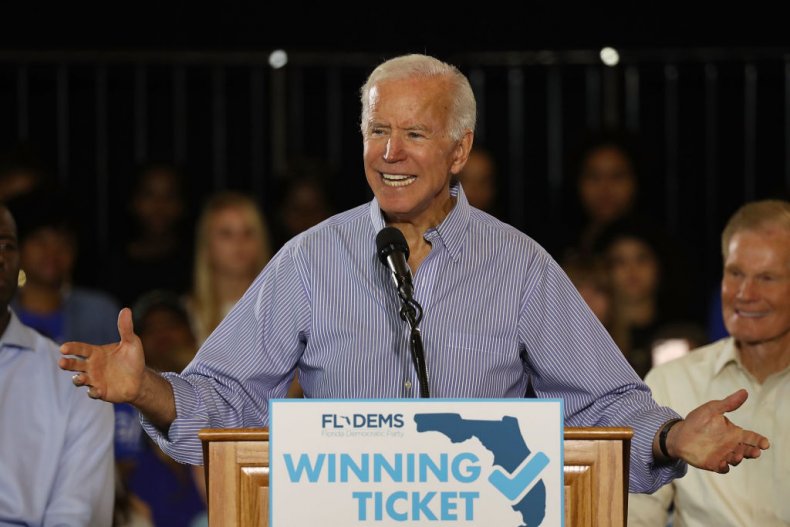 Joe Biden speaks during a campaign rally held at the University of South Florida Campus Recreation Building on October 22, 2018 in Tampa, Florida. The survey showed that a plurality of voters in Florida would pick Biden over the Donald Trump in a hypothetical general election matchup. Joe Raedle/Getty

Meanwhile, 53 percent of Florida voters said that they disapprove of Trump’s response to the coronavirus pandemic, while just 45 percent said they strongly or somewhat approve. Notably, Dr. Anthony Fauci, a key figure on Trump’s coronavirus taskforce who serves as the director of National Institute of Allergy and Infectious Diseases, received a significantly higher approval rating, with 85 percent of respondents viewing his leadership favorably and only 6 percent disapproving.

Trump officially became a Florida resident in late 2019, after being born, raised and building his career in New York. During his term as president, Trump has regularly traveled to his Mar-a-Lago Club in Palm Beach to take breaks from Washington, D.C.

In 2016, Trump narrowly beat former Democratic presidential candidate Hillary Clinton in Florida, with neither candidate winning a majority of the state’s votes. Trump garnered 49 percent of voters in Florida, while Clinton won 47.8 percent. Clinton’s loss in the state came after former Democratic President Barack Obama won Florida with 50 percent of the vote in 2012, and with 51 percent in 2008.

Biden, who served as Obama’s vice president, has not yet secured the Democratic nomination but is viewed by most analysts as the presumptive nominee. Democratic presidential candidate Senator Bernie Sanders of Vermont is still seeking the party’s nomination, but he trails the former vice president in the race for pledged delegates, as well as in national polls.

Most recent national polls show Biden and Sanders beating Trump in hypothetical general election matchups, with the former vice president generally having a more commanding lead over the president than the senator from Vermont.